My solo art exhibition at the Asylum Art Gallery in Wolverhampton is this Friday from 6 - 9 pm and will run until April 20th  http://www.theasylumartgallery.com/#!belonging/ci0e

Naturally I'm very excited as I've been working hard towards this exhibition and am really looking forward to it. It's also a very ironic and interesting coincidence that I would be exhibiting at the "Asylum" when I have recently been informed that my request to reside in the UK on grounds that my ten year old daughter was born here has been rejected by the British Home Office and now I am in the process of leaving the UK for good. I'm not sad, a bit disappointed, but not sad; I've always thought of myself as a traveller, a wanderer, I can't imagine living in one place for too long, I've always questioned the concept of "home" and "belonging", these concepts are not real, they're lies invented by man to justify his other lies of "loyalty", "nationality" and "patriotism".
I'm looking forward to the future, a new beginning, a new place to live, new people to meet, new relationships and new experiences, I'd like to live somewhere warm, where the people are warm, friendly and kind, I struggled trying to make friends here in the UK, people here don't communicate unless it's by text messages, e-mails or facebook! They can't relax unless there is a screen between them and the world and even through these limiting, detached means of communication they still maintain their distance and their boundaries. So, I've got my eyes set on Dubai a young, exciting and vibrant city. Dubai is diverse, multicultural and cosmopolitan, full of new opportunities and hopefully full of people who believe in real human relationships :) 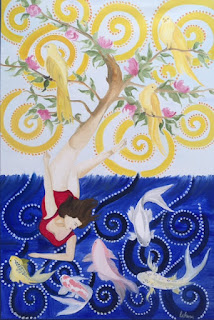 I named this painting "I Belong Somewhere", it represents my feeling of not belonging in the UK but also not belonging in the country where I was born (Kuwait). The subject is half immersed in the sea swimming with the fish while her other half is above water turning into a tree where birds build their nests. She belongs neither to land nor sea. 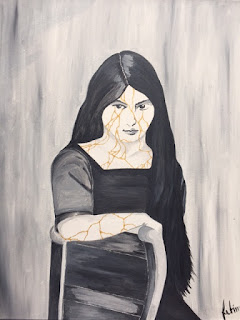 I named this painting "Broken", it represent violence and abuse against women.
Kintsugi ("golden joinery") or kintsukuroi ("golden repair") is the centuries-old Japanese art of fixing broken pottery with a special lacquer dusted with powdered gold, silver, or platinum. Beautiful seams of gold glint in the cracks of ceramic ware, giving a unique appearance to the piece. This repair method celebrates and emphasises the fractures and breaks instead of hiding or disguising them. Kintsugi makes the repaired piece even more beautiful and more valuable than the original, revitalizing the artifact with new life. 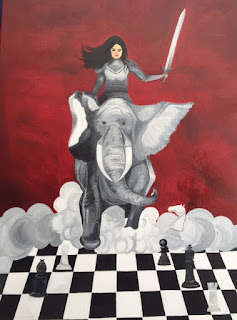 I like the idea of a female being the most powerful chess piece (chessman). The queen in a game of chess is not only the most powerful player but also the most flexible in movement, she is strategically moved on the chessboard to protect the king who is less flexible and thus more vulnerable to an attack.


The superiority of the female as the Queen is often reflected in wildlife; in a herd of elephants the oldest and the largest female elephant in size "The Matriarch" leads the herd, makes all the decisions and is obeyed and respected by the rest of the herd members. The Queen Bee dominates the bee colony or hive, she is specially fed, followed by all the bees in the colony and is fiercely protected. 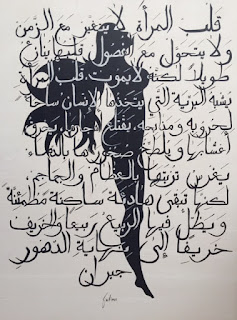 In this painting I mixed Arabic calligraphy with the art of painting, Arabic is my native language and the text in the painting is a quote by Gibran Kahlil Gibran, my favourite Arabic poet, that's why I named this painting Gibran. The quote translates:


“A woman’s heart does not change with time, nor does it alter with the seasons. A woman’s heart may for long suffer and endure but does not perish. Her heart is like the wild which man destroys with his wars and his massacres, he pulls out its trees, drenches its rocks with blood, and yet it remains, calm and tranquil. In a woman’s heart spring remains spring until the end of time” 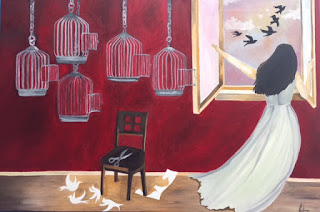 The Past
She opened the window and said to the past: "If I let you go, will you let me go too?"


All of my painting's (in one way or another) portray women. Why? Because women are magical beings, we are deep, complex and multidimensional, we are the source of all creation, beauty and inspiration. I am forever fascinated and intrigued by depth and complexity of the female emotion. I also enjoy painting women who look like me; tanned skin, black hair, brown eyes and full lips. Most women in works of art have Western features i.e. white skin, blond hair, blue eyes and rosebud lips, they are very beautiful of course, but I'd like to see more Eastern and Middle Eastern women represented in works of art, beauty in art should be diverse and relevant, not limited to one race.