'Ayat' a Poet Jailed for Speaking Out. 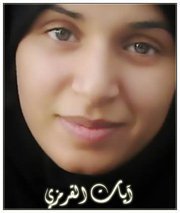 
Ayat Al Gormezi is a Poet from Bahrain, she was arrested at her home by Bahraini police on March 30th for reciting a poem condemning the ruthless ruler of Bahrain during a pro-democracy rally in 'Manama' Bahrain's capital. I watched her perform her poem before a crowd of Bahraini protestors on youtube http://www.youtube.com/watch?v=yOVANbq_q5A&feature=related
Here's my translation of her poem.
Al Gormezi begins her poem as follows:
This is a message to he who assumes he will dance upon the pains and wrenches of the people suffering from sectarianism disorder and chaos[1]. This poem addresses the man behind the injustice and prejudice in this country, the ruler of this country himself Hamad[2].
(Protestors shouting: Down with Hamad, Down with Hamad, Down with Hamad)
The poem is a long dialogue between Hamad (the ruler) and the Devil. The Devil being the source of all evil is left speechless by the horrors which Hamad has and continues to inflict on his people, the Devil urges Hamad to have mercy on his people and stop the bloodshed, but Hamad refuses to stop the suffering and responses to the Devil as follows:
I still haven’t filled my stomach with their blood
I still haven’t exploited all the riches of this land to benefit myself and my companions
I still haven’t tortured every youngster every child every old man,
I still haven’t stepped on their heads in my jails and dungeons.
I will agonize them and open a million doors to ensure their degradation
I don’t care about the hard working men and the well educated
I will ensure they are jobless, poor, weak and dependent
They mean nothing to me, they are worthless to me, they are worthless to me...
(Protestors shouting: Down with Hamad, Down with Hamad, Down with Hamad)
Al Gormezi ends her poem by emphasizing on the strong ties between the Sunni and Shia in Bahrain, with repetition always being a method of emphasis in Arabic poetry:
Sunni, Shia we are brothers protected by God.
Sunni, Shia we are brothers protected by God.
She finally end her poem with the very highly provocative line:
Take my advice Hamad; gather the garbage of your unsuccessful, failed regime and depart
you never lived up to our expectations or the high standards of the good heroic people of this land.
(Protestors shout: Down with Hamad, Down with Hamad, Down with Hamad)
[1] Bahrain has a majority of Muslim population divided into ‘Sunni’ and ‘Shia’ Muslims, the relationship between the two sectors has always been peaceful, however, in recent years the corrupt government has provoked a sense of deep discrimination and segregation between the two Muslim divisions, causing hate crimes, discrepancy and racism.
[2] Hamad, is the name of the Bahraini King.
Posted by Fatima Matar at 24.6.11