In Love with a Dead Poet!

In Love with a Dead Poet! 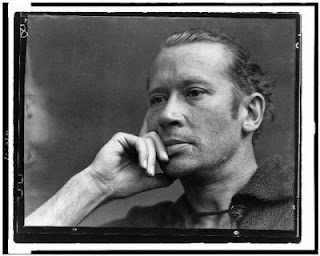 The strong winds we’ve been experiencing here in the West Midlands (UK) for the past couple of days reminded me of e.e.cummings’ The Wind is a Lady, Sonnet I from his collection Post Impressions:
the wind is a Lady with
bright slender eyes (who
moves) at sunset
and - who touches – the
hills without any reason
(i have spoken with this
indubitable and green person
“Are You the wind?” “Yes” “why do you touch flowers
As if they were unalive, as
If They were ideas?” “because, sir
things in which my mind blossom will
stumble beneath a clumsiest disguise, appear
capable of fragility and indecision...
Every poet has favourite poet, a poet they hold dear, a poet who inspires their work, however my fascination with Edward Estlin Cummings (1894 – 1962) has exceeded the mere appreciation of verse and inspiration of thought to develop into a fondness and a love towards the person of cummings. But can you be in love with a dead person you’ve never met? I know that a lot of people continue to love their loved ones after they had passed, but this is someone I have never met before!
I've become besotted with cummings from my first readings of his work, when my first reaction was; ‘why are all the words written in lowercase letters? where’s the punctuation? and why was the poem fashioned in this unusual manner and shape? I found the answer to this in Sonnet (VII) of his collection Four:
since feeling is first
who pays any attention
to the syntax of things
will never wholly kiss you
cummings mostly wrote about love and nature, however his love poetry at the time was rejected by many publishers due to its highly erotic and sexually suggestive meaning, when  his collection No Thanks was finally published he dedicated it to the 14 publishers who have rejected it before, here is poem 16 of  his collection No Thanks:
may i feel said he
(i’ll squeal said she
just once said he)
it’s fun said she
may i touch said he
how much said she
a lot said he)
why not said she
(let’s go said he
not too far said she
what’s too far said he
where you are said she)
may I stay said he
(which way said she
like this said he
if you kiss said she
may i move said he
id it love said she)
if you’re willing said he
(but you’re killing said she
but it’s life said he
but your wife said she
now said he)
ow said she
(tiptop said he
don’t stop said she
oh no said he)
go slow said she
cccome? said he
ummm said she
you’re divine! said he
(you are Mine said she)
The same incident of rejecting his erotic poetry reoccurred when he tried to publish his collection Tulips and Chimneys, much to Edward’s disappointed the collection was never published in it complete form since publishers found many of the poems to sexually explicit, many poems were removed from the collection, cummings then had the rejected poems published in later collections entitled XLI Poems and &. Both XLI and & received better reviews than Tulips and Chimneys.
These are some of the reasons why I am so love-struck by cummings, I love him for saying
the mind is its own beautiful prisoner.
mine looked long at the sticky moon
opening in dusk her new wings.
Sonnets – Actualities (VI)
But I love him even more for saying:
i am a beggar always
who begs in your mind
am this person of whom somehow
you are never wholly rid..
you might as well toss him a few thoughts..
Four (XV)
There are answers in e.e.’s poems, that is why I enjoy reading them, but they are also the kind of poems which are not fully ingested unless read out loud. And thus to my darling beloved e.e.cummings i would like to finally say:
i do not know what it is about you
that closes and opens; only something in me understands
from his poem (somewhere i have never travelled)
Posted by Fatima Matar at 5.4.11